Fashion and footwear brand ASH commissioned Francesc Rifé to create the new design concept for its stores around the world. While the new language sought to recall forms suggested by the architecture of contemporary cities, that the first two stores to debut with this image were located in Shanghai has served to use as inspiration a traditional construction technique in Asia: the bamboo scaffolding.

Interior view of the ASH in Raffles City 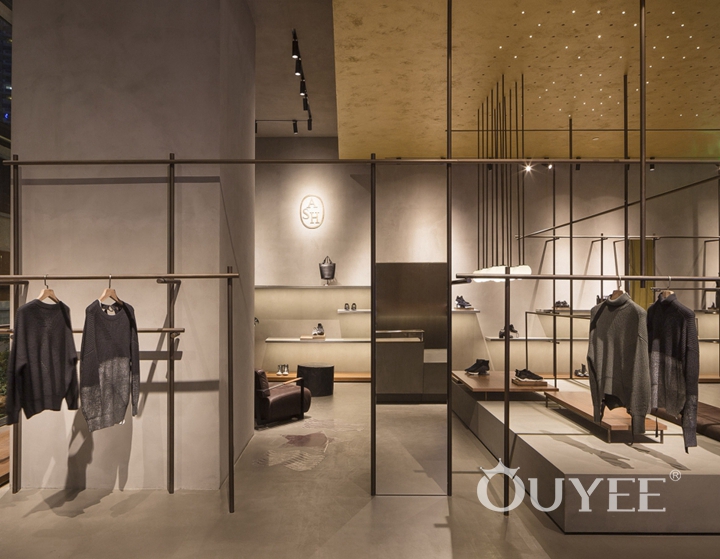 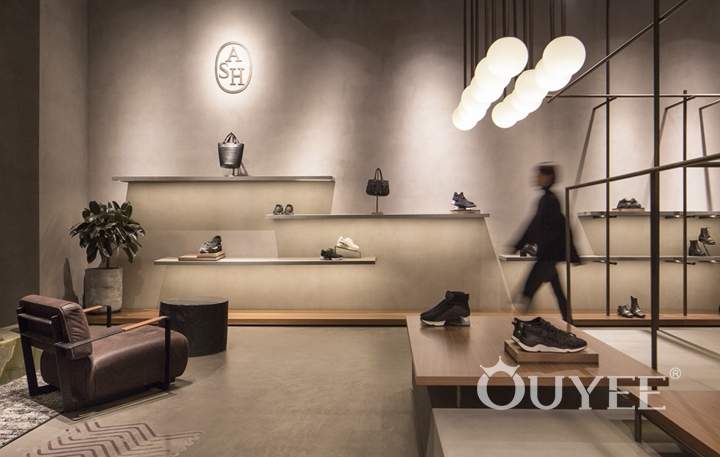 Interior view of the ASH in Plaza 66

Located in the mall centers Raffles City Changning, in the heart of the Zhongshan business district, and Plaza 66, one of the most important commercial spaces in China, the design of these two stores is marked by a structure that order the space, allow the products be displayed and through it the brand begins a new path to prêt-à-porter. These metal tubular frames, executed in sulfurized brass with a very dark finish, joined as if they were knotted together as bamboo scaffolding, resulting in a very clean and unique grip. Thus the end result was a mesh with great dynamism.

The hard lines of this brass spine is defined from one of the most important elements of the project: a golden partial ceiling, symbol of the personality of ASH. It is characterised for integrating multiple holes from which light is projected, following the needs of the space; while other orifices are prepared to add lamps and hanging shelves, at the same time that they allow to fix the main structures. The lighting of this area is defined by spots with a very small size, to illuminate the product properly, giving as a result a starry sky. 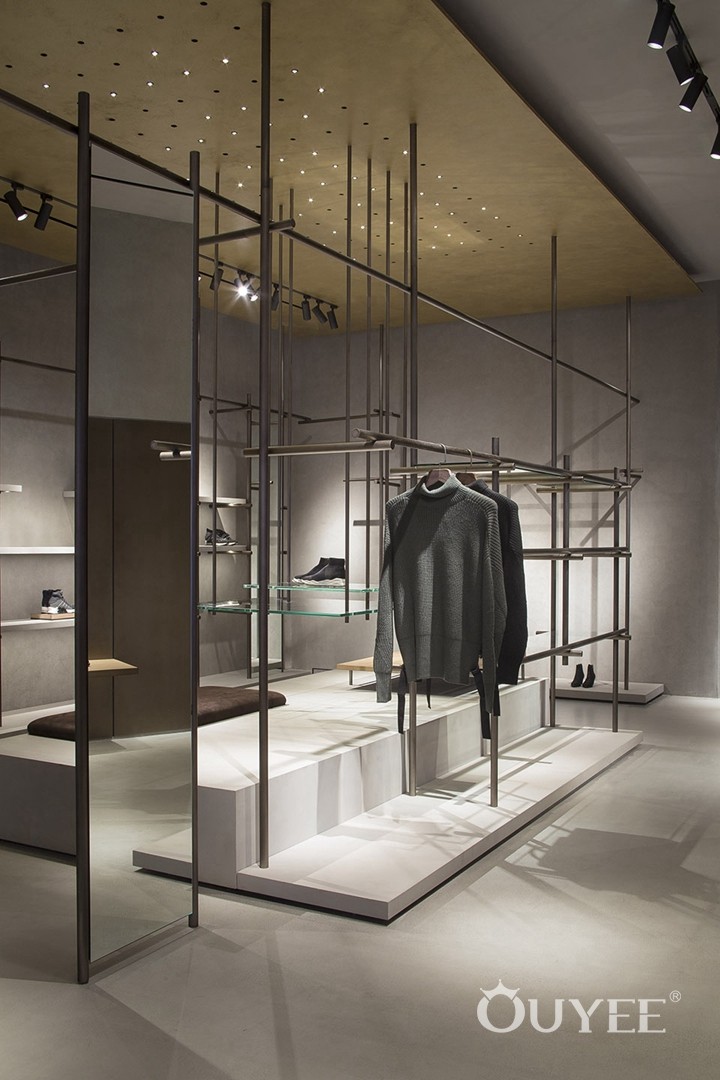 Hanging shelves and ceiling looks like a starry sky

Another of the main materials of the new image is undoubtedly concrete, projected in both vertical walls, floors and ceilings, spreads each and every one of the elements of the set. A reference to the constructive phenomenon of the city that in turn gives the project a neutral base, and helps to the ceiling and structure come quickly into focus. 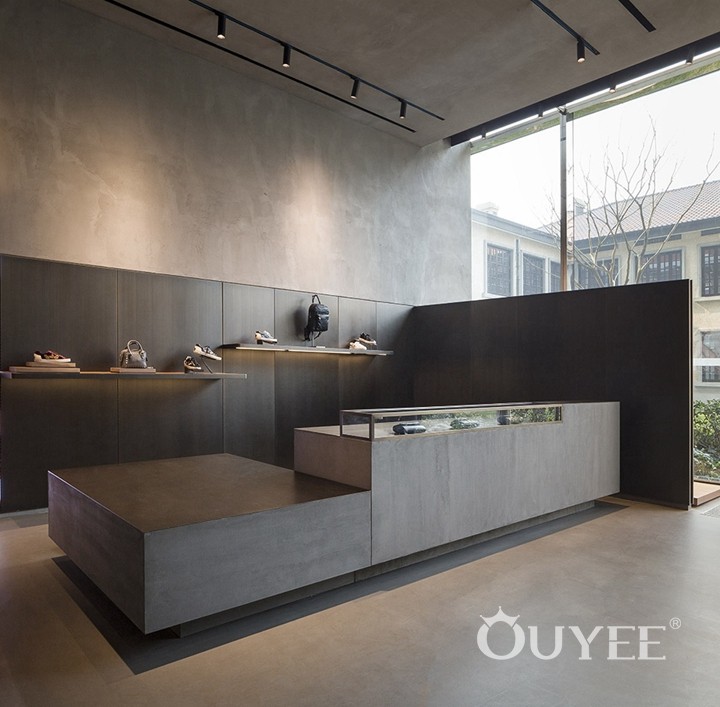 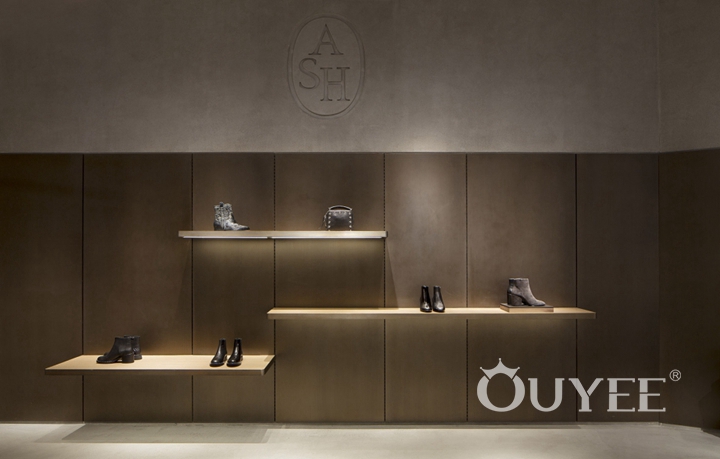 Following that same language, the furniture, such as display modules, seating areas and the sales counter, have been integrated as architectural elements. At the same time, the waiting area is dressed by the Kong armchair by JMM, complemented by side pieces in green marble and natural wood. The vocabulary developed for the stores is completed with the fitting room area designed in aged mirror that adds an extra dimension to the experience of visitors.Conceived to work in harmony with dynamic and challenging installations, the shop windows of both stores extend to the exterior, the interior dialogue started with the brass, and incorporate a clean interpretation of the backlit ASH logo. Plan of ASH in Raffles City 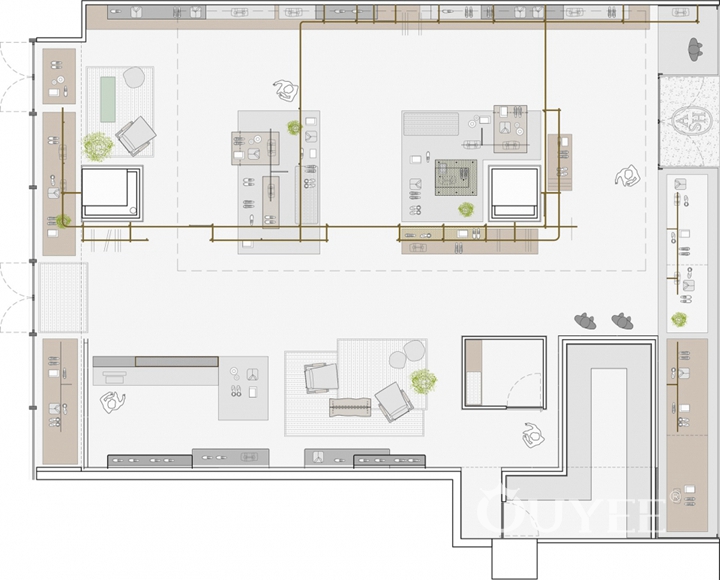